We offer artisanal handcrafted pop bars and ice cream featuring over 30 flavors, mouthwatering mangonadas, a full offering of tostilocos, fresh off the cob esquite (sweet white corn), and many more delightful snacks for you in the city of Orange CA! 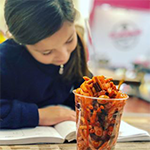 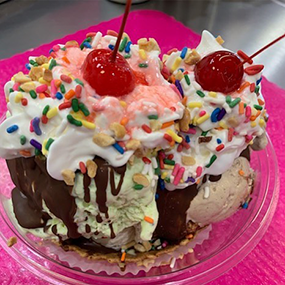 Such a DELIGHT in the neighborhood! The staff is so friendly and sweet - their servings are HUGE and the prices are right on.

Great place! The place is clean. Nice staff, and very good ice cream. The nuez and pistacho are my favorite rich in flavor. They have other Mexican delights to try them out. So if you are in the area stop by. You won't regret it.

Absolutely delicious. If I didn't have bills to pay I would come here every day for a paleta.

I drive all the way from Riverside, cause it's the best La Michoacana around.

Like many successful start-ups, the idea for La Michoacana Delights was developed at the dinner table, but in this case the inspiration came from much farther away. Raul and Norma Maldonado were sharing a meal with Raul's nephew, Ricardo Maldonado, and his wife, Janet, a little more than three years ago. All four have family ties to Michoacan, a state in western Mexico known as the world's largest producer of avocados. It's also home to Tocumbo, a small town where nearly every family is involved in one of the many businesses making natural ice cream. Vice News once called the tight-knit community "the land of frozen desserts."

"We were reminiscing about some of the traditions and the things we remember as kids - the ice cream and paletas - and remembering the nostalgia of that," recalls Janet. So, it was a natural for the two couples to launch a small Tustin Street storefront that sells paletas, or pop bars, made with fresh fruit such as strawberries, bananas, and watermelon. One of the 55 paletas on the menu is chongos, made with caramelized cheese curd, sugar and cinnamon. It's a popular dessert for those craving something sweet.

Other Michoacan-inspired treats include Mangonada, a sorbet-style of ice cream with mango and chamoy; and Tostilocos, featuring Tostito chips with cucumber, jicama, pork rinds, Japanese-style nuts, chamoy, Tajin, and lime. "We've had a lot of customers who come in and reminisce about their experiences with the desserts," Janet says. "They remember having them as kids and enjoying them with their families."

La Michoacana Delights, which opened in July 2018, also serves smoothies, milk shakes, fruit cups and fruit trays. Prices range up to $8.99; paletas, the store's single most popular item, are $2.89 each. In addition to being a family business, it's also a team effort with all four pitching in - whether it's working the front counter, preparing the food or working with suppliers, which range from the nearby Stater Bros. supermarket to the giant distributor Sysco. Passion fruits come from local sources that import them from Mexico and South America. "Since we've opened, we've heard that our place is unique and is a welcoming experience," says Norma. "There are other stores that offer similar products, but what we serve is made on-site and it's definitely premium and quality." We look forward to serving our customers with the highest quality products, best customer service, in a family-friendly and clean environment.